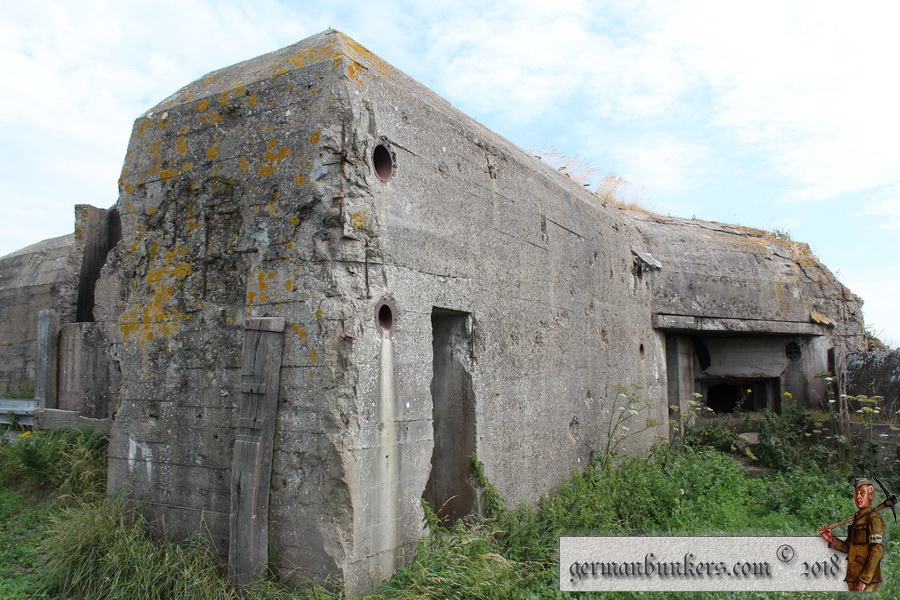 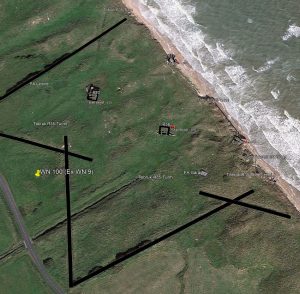 An overheard screen capture from Google Earth and showing the details of WN100. The black lines are tank ditches which were surrounded by a minefield. (click to enlarge photo) (detail by Relikte 1940-1945)

WN 100 was a formidable strong point with a number of bunkers including:
R633 mortar bunker
R656,
2 x R677
R35 Tobruks
Searchlight bunker
FA garage etc. minefields and anti-tank ditches. We will cover the details later once this section is complete. We start off our visit to WN 100 with the R633 bunker, we will cover the remaining strong point as time permits.

Utah Beach was the most western beach between Pouppeville and La Madeleine, three miles long, assigned to the U.S. 1st Army, 7th Corps. Casualties were the lightest of all landings – out of 23,000 troops, only 197 men were killed or wounded. It was divided into zones assigned Tare Green, Uncle Redand Victor.
(source: U.S. Department of Defence) 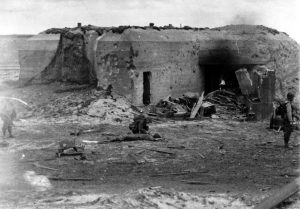 WN 100 and the R633 Mortar Bunker shortly after it was taken by U.S. forces on D-Day. (photo U.S. National Archives)

This is an extremely fascinating part of the Utah Beach defences on D-Day given the fact that this R633 Mortar Bunker is built in reverse or inverse construction from the standard Regelbau design. The photo on the right shows the same R633 bunker with U.S. forces treating the injured German soldiers from the bunker shortly after the battle.

The experiences of Allied troops landing on D-Day were very different. The paratroopers scattered by poor weather across hundreds of miles of countryside faced different challenges from those streaming off the boats onto the landing beaches. Even on those beaches, no two experiences were the same, differences in circumstances made each soldier’s experience a different battle.

The American landings at Utah Beach were among the easiest, as the Germans had not prepared heavy defenses. Because of flooded land in the area, the Germans had not expected the Allies to land there, and so it was lightly defended. With three-quarters of the trains and strategic bridges in northern France taken out by air raids and the French Resistance, there was little way for the Germans to respond to the landings.

A massive bombardment by battleships, cruisers, and destroyers shattered what defenses the Germans had. 32 amphibious tanks sailed two miles to the beach under cover of the bombing, with only four of them lost on the way. With armor in place, the infantry followed and found only light resistance.
(source: warhistoryonline) 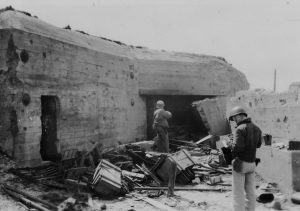 The R633 as seen in another photo after the battle. According to the U.S. Navy archives the R633 bunker was taken out with assistance from the USS Butler on June 7th, 1944 or D+1 though most sources state that it was taken out on D-Day, June 6th. The strange thing about this photo is there is no smoke damage above the embrasure. I think that a fire or explosion occurred after the battle as seen in the above photo.
(Photo: Naval History and Heritage Command) 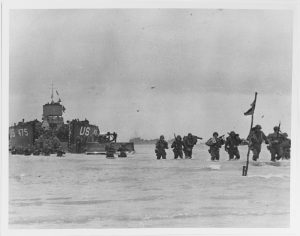 Task Force U Moves In

While parachutists attempted to assemble in the labyrinth of the Normandy hedgerows and marshes, troops aboard transports prepared to transfer into landing craft for the assault on the beach. At 0430 (H minus 2 hours) detachments of the 4th and 24th Cavalry Squadrons under Lt. Col. E. C. Dunn landed on the Iles St. Marcouf to capture what was suspected to be a hostile observation post or casemate for mine-field control. Prior to the landing four men armed only with knives swam to what was supposedly an enemy-held shore to mark the beaches. No enemy was encountered, although both islands were found to be heavily mined and some casualties were suffered. All elements of the detachment (numbering 132 men) were ashore and the island occupied by 0530.

In the meantime the unloading of troops into assault landing craft proceeded uneventfully. After the transfer, LCVP’s circled the transports awaiting the order to rendezvous. At H minus 40 minutes (0550) warships of the bombardment group of Task Force 125 began firing on enemy shore batteries. A few minutes later 276 Marauders of the Ninth Air Force dropped 4,404 250-pound bombs on 7 objectives on the beach, extending from les Dunes de Varreville to Beau Guillot. The effectiveness of this attack is difficult to assess. Les Dunes de Varreville seems to have received more bombs than any other target, possibly because the conspicuous tank ditch surrounding the area persuaded pilots to unload on it when briefed targets could not be located. About one-third of all bombs fell between high and low tide water marks. As assault craft started for the beach, the fire support group, consisting of thirty-three variously equipped craft, began the process of beach drenching. Seventeen of these craft mounted rocket launchers and discharged their rockets when the first waves of assault craft were still 600 to 700 yards from shore.

The first wave consisted of 20 LCVP’s, each carrying a 30-man assault team from the 8th Infantry. The 10 craft on the right were to land on Tare Green Beach, opposite the strong point at les Dunes de Varreville. The 10 craft on the left were intended or Uncle Red Beach, 1,000 yards farther south. The entire operation was timed against the touchdown of this first assault wave, which was scheduled to take place at 0630. Eight LCT’s, each carrying 4 duplex drive (DD ) amphibious tanks, were scheduled to land at the same time or as soon thereafter as possible.1 The second wave comprised another 32 LCVP’s with additional troops of the 2 assault battalions, some combat engineers, and also 8 naval demolition teams which were to clear the beach of underwater obstacles. The third wave, timed for H plus 15 minutes, contained 8 more LCT’s with dozer tanks. It was followed within 2 minutes by the fourth wave, mainly detachments of the 237th and 299th Engineer Combat Battalions, to clear the beaches between high and low water marks. 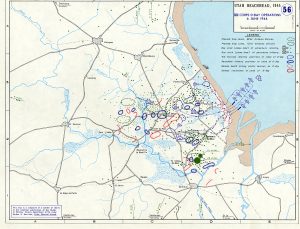 The first wave arrived at the line of departure on time and all twenty craft were dispatched abreast. Support craft to the ear were firing machine guns, possibly with the hope of exploding mines. When the LCVP’s were from 300 to 400 yards from the beach, the assault company commanders fired special smoke projectors to signal the lifting of naval support craft fire. Almost exactly at H Hour the assault craft lowered their ramps and six hundred men walked into waist-deep water to wade the last 100 or more yards to the beach. The actual touchdown on the beach was therefore a few minutes late, but the delay was negligible and had no effect on the phasing of the succeeding waves. Enemy artillery had fired a few air bursts at sea, but otherwise there was no opposition at H Hour. The morale of the assault troops was excellent. The men waved their rifles as they reached the dry beach, some of them shouting, “Goddam, we’re on French soil.” They were obviously relieved and happy that this was not another “dry run.”

The first troops to reach shore were from the 2d Battalion, 8th Infantry. The 1st Battalion landed a few minutes later. Both came ashore considerably south of the designated beaches. The 2d Battalion should have hit Uncle Red Beach opposite Exit 3 . The 1st Battalion was supposed to land directly opposite the strong point at les Dunes de Varreville. The landings, however, were made astride Exit 2 about 2,000 yards south. 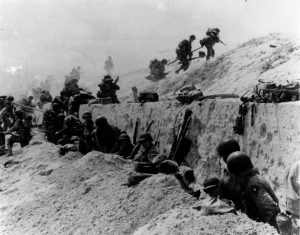 U.S. Soldiers of the 8th Infantry Regiment, 4th Infantry Division, move out over the seawall on Utah Beach, after coming ashore. Other troops are resting behind the concrete wall. Photograph from the Army Signal Corps Collection in the U.S. National Archives. (click to enlarge photo)

It is difficult to pinpoint the cause for this error. Both Red Beach control vessels had been lost, and one of the Green Beach control vessels had gone back to bring in the LCT’s carrying DD amphibious tanks. Guiding the initial assault waves to the proper beaches was therefore the sole responsibility of one control vessel. The possibility of error was increased by the strong tidal current as well as by the beach drenching administered by naval fire support craft, which threw up a tremendous cloud of smoke, dust, and fine sand, obscuring the beach for many minutes just prior to and after the jump-off from the line of departure.

Potentially this error was very serious, for it might have caused great confusion. In fact it did not. The original plans, in which each assault section had a specific mission, could not be carried out in detail, of course. Brig. Gen. Theodore Roosevelt, Jr., assistant commander of the 4th Division, had volunteered to coordinate the initial attack on the beach strong points until the arrival of the regimental commander, Colonel Van Fleet, and had landed with Company E. When it was realized that the landings had been made at the wrong place, he personally made a reconnaissance of the area immediately to the rear of the beach to locate the causeways which were to be used for the advance inland. He then returned to the point of landing, contacted the commanders of the two battalions, Lt. Cols. Conrad C. Simmons and Carlton O. MacNeely, and coordinated the attack on the enemy positions confronting them. These impromptu plans worked with complete success and little confusion. The errors in landing actually proved fortunate. Not only was the beach farther south less thickly obstructed, but the enemy shore defenses were also less formidable than those opposite the intended landing beaches.

Please refer to this article on M19 Maschinengranatwerfer (mortar)

All photographs on this visit to France were taken in July 2018 and are subject to copyright. Please be respectful and do not copy them for your own personal or professional use. If you would like to contact the photographer and admin of this web site please e-mail admin@germanbunkers.com