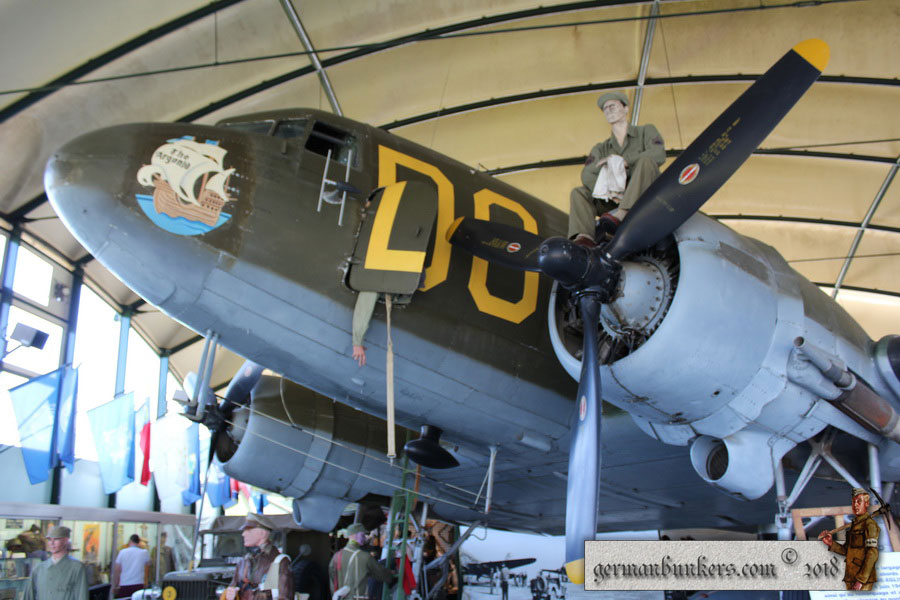 A Dakota on display at the U.S. Airborne museum in Sainte-Mere-Eglise, Normandy. 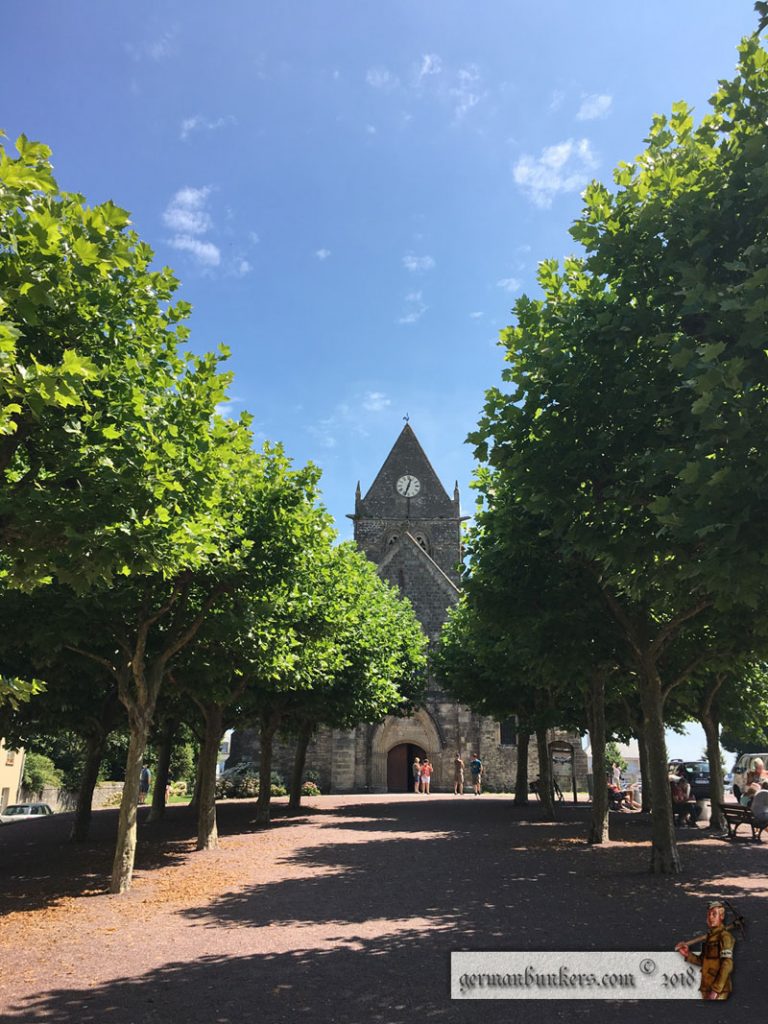 The church in Sainte-Mere-Eglise built in the 12th century.

The U.S. airborne museum is located in Sainte-Mere-Eglise, Normandy and is dedicated to the men of the 82nd and 101st Airborne Divisions who took part in the D-Day airborne assault on June 6th, 1944 and the battle to liberate France.

This was my second visit to Saint-Mere-Eglise in the past couple of years and I highly recommend that you put this museum and this beautiful part of Normandy on your travel list when visiting the D-Day beaches. There is ample parking in the area most notably outside of the church itself and next to the museum. I highly recommend getting here before they open at 9:00 a.m. as I did. Even then the parking area was already filling up and there was a line to enter the museum.

The address to the museum is:
14 Rue Eisenhower
50480 Sainte-Mère-Église, France

While Task Force U was still approaching the Transport Area, the first blows had already struck the enemy from the air. The intensive air bombardment of the invasion area had started about midnight, 5 June. At that time RAF bombers made intensive attacks on the known enemy batteries along the entire invasion coast. Shortly before H Hour medium bombers of the Ninth Air Force dropped several hundred tons of bombs on enemy defenses at Utah Beach in support of the seaborne assault. Between these bombings, however, came the still more telling attacks by airborne infantry.

It was the largest use of airborne troops up to that time. Paratroop elements of the 82d and 101st Divisions, comprising 6 regiments, with the normal complement of parachute field artillery and engineers, numbering more than 13,000 men, were flown from bases in southern England to the Cotentin Peninsula in approximately 925 C-47’s. An additional 4,000 men, consisting of glider infantry with supporting weapons and medical and signal units, were to arrive in 500 gliders later on D Day and on D plus 1 to reinforce the paratroops. Seaborne echelons were to join the divisions on D plus 1. To the parachute troops was assigned what was probably the most difficult task of the initial operation-a night jump behind enemy lines five hours before the coastal landings.

The 101st Airborne Division Lands
At 2215 on D minus 1, 432 C-47’s began taking off from 7 departure airdromes in England, with 6,600 paratroops of the 101st Airborne Division. They were scheduled to begin dropping at H minus s hours. At dawn (H minus 2 hours) they were to be reinforced by approximately 150 glider troops from 51 gliders, and at dusk (H plus 15 hours) by an additional 165 in 32 gliders. Preceding the main echelons of paratroops by half an hour were 20 pathfinder aircraft which had the mission of marking six drop zones (for both divisions) and one landing zone. Marking of the zones was not entirely successful, but all of the pathfinder teams carried out at least part of their missions. 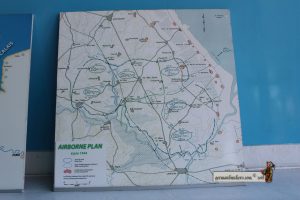 Paratroop echelons approached the Cotentin from the west and made their landfall in the vicinity of les Pieux. Formations were tight until reaching the coast, but from the coast to the Merderet cloud banks loosened the formations, and east of the Merderet flak scattered them further. In general the division did not have a good drop, although better than that of the 82d Airborne Division. About 1,500 troops were either killed or captured and approximately 60 percent of the equipment dropped was lost when the bundles fell into swamps or into fields covered by enemy fire. Only a fraction of the division’s organized strength could ini-tially be employed on the planned missions, and many of the missions carried out were undertaken by mixed groups which did not correspond with original assignments.

The fifty-one Waco gliders, carrying command personnel and antitank weapons, came in early on D-Day morning. This type of landing had never been attempted before in darkness. Many gliders were wrecked as they landed in the small Normandy fields and there as damage to equipment and loss of personnel, one of the casualties being Brig. Gen. Don F. Pratt (Assistant Commander, 101st Airborne Division), who was killed in landing. In general, however, losses were not excessive and the mission was a success. Later in the day, at 2100, the serial of thirty-two Horsa gliders-carrying command, communications, and medical personnel and equipment-suffered heavier losses in personnel and gliders because of the unsuitability of the small landing fields. Equipment suffered relatively little damage. A seaborne echelon of the division, including the 3 27th Glider Infantry, joined the division on D plus 1.

The initial widespread dispersion of the 101st Division was not an unmixed evil. The Germans appear to have been confused by the scattered drops. For some time they were unable to estimate the magnitude of the invasion and, in consequence, reaction was slow and uncertain. The war diary of the German Seventh Army noted at 0130, 6 June, reports of Allied paratroop landings east and northwest of Caen, at St. Maricove, at Montebourg, on both sides of the Vire River, and on the east coast of the Cotentin Peninsula. Fighting was reported at le Ham. For several hours the German command was uncertain whether the landings represented a major action. At 0400 it was estimated that the American plan seemed to be to “tie off the Cotentin Peninsula at its narrowest point.”

Uncertainty at the enemy command level seemed to have been duplicated among the subordinate units. It was generally the experience of the 101st Airborne Division, at least, that although the enemy defended freely with fire he was initially reluctant to move out of his prepared defenses to attack. When attacks were launched they were seldom pushed vigorously. Thus in some measure the enemy’s confusion tended to offset that of the invaders and, by dint of considerable improvisation, the 101st was able to accomplish most of its initial missions. 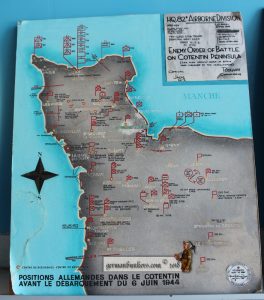 The plan of the 101st Airborne Division called for the seizure of the four inland exits-the western ends of causeways-from the inundated area west of Utah Beach between St. Martin-de-Varreville and Pouppeville. In the southern part of the division’s sector two bridges across the Douve River, on the main highway northwest of Carentan and the railroad bridge to the west, were to be destroyed. In addition, the division was to seize and hold the la Barquette lock and establish two bridgeheads over the Douve at le Port northeast of Carentan. The sum of these missions thus provided for the clearing of the enemy’s secondary beach defenses and the organization of the Corps’ southern flank for defense and further exploitation. After being relieved in the beachhead area by the 4th Division, the 101st was to seize Carentan and establish contact with V Corps, fusing the Utah and Omaha beachheads. Thereafter the 101st Airborne Division was ordered to protect the southern flank of VII Corps east of the Merderet River. The division would be reinforced by the attachment of a company of tanks of the 70th Tank Battalion, the 65th Armored Field Artillery Battalion, and a troop of the 4th Cavalry Reconnaissance Squadron when these were landed by sea.

All of the artifacts photographed and pictured below were donated by survivors and families of the 82nd and 101st Airborne as well as local French residents that have donated their collections of German wartime memorabilia. These photographs represent a pivotal moment in the history of mankind and is not representative or affiliated with any political views.