In the summer months of 2013, 2016, 2018 and our latest visit in 2022 we made four journeys to France to visit and photograph the remains of the massive Third Reich construction project commonly known as the Atlantikwall. You will notice the spelling of Atlantic ends in a “K” which is the German way of spelling it.

The 2013 visit concentrated solely on the Normandy region with a primary focus on Omaha Beach and the surrounding coastal batteries both Kreigsmarine and Heer (Navy & Army). The 2016 visit was more expansive concentrating on several key areas which included the Pas de Calais, Oye Plage, Gravelines, Marck, Dunkerque, Grand-Fort-Philippe and a number of other areas which will be touched upon as you make your way through this section. I also took the long but beautiful drive from Audinghen to Arromanches in Normandy. My second visit to the Normandy region touched again on Omaha Beach but focused on the British and Canadian Beaches as well. A number of open air bunker museums were visited as well as the varying bunkers that dot the surrounding region. 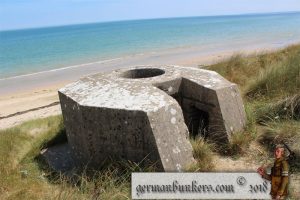 During our 2018 trip to France we concentrated on the sites not visited in 2016 and expanded on the large coastal batteries found in Cherbourg and the Cotentin Peninsula. Some of the other areas covered were the areas of Le Havre, Honfleur, Oiustrehem, Ecqueville, Dieppe, Le Treport, Fort Mahon Plage, Berck, Merlimont, Boulogne-sur-Mer, Saint Martin Boulogne, Wimereux, Ambleteuse, Audresselles, Waringzelle, Framezelle, Audinghen, Wissant, Sangatte, Calais, Dunkerque and Belgium.

In the summer of 2022 and our most recent trip we covered areas which we haven’t researched before including:

We also were able to include a number of new additions which we had missed on previous trips including ones in Normandy, Fecamp, Baie de Somme and the Nord-Pas-de-Calais.